Holy things
Leviticus 10: Distinguish between the holy and the common, between the ritually clean and unclean.
It starts with another “fire” issue. Aaron’s sons, Nadab and Abihu have failed to follow the Lord’s instructions concerning fire used in worship. The result is fire from Above! The fire of the wrath of God kills them. Things have calmed down a bit, and Moses warns everyone to not take the things of God lightly. Holy things must be treated as such; with reverence. If it’s possible to treat uncommon things as common and thus bring condemnation, it is just as possible to treat common things as uncommon. Our society specializes in that. Things that should be treated with absolute reverence are tossed aside as though they’re worthless. Silly things that are either simply common or worse are held up as shining objects of worship. My society does that with sports, entertainment, and so-called success. To treat the holy as common is sin that brings death. The same can be said of treating common things as holy.
Take Away: Priorities are critically important in all of life.

Personal business
Leviticus 9: Next Aaron presented the offerings of the people.
The sacrificial system has been explained, the priests ordained, and now it’s getting underway. Moses, God’s representative, puts everything into place and now Aaron, the newly anointed high priest initiates the first sacrifices. Before he presents the offerings of the people he has personal business to attend to. He makes offerings of his own in preparation for serving the people. The animals are killed and their blood is applied, a reflection of Precious Blood that will be shed many years in the future. It’s only after Aaron has done that that he turns his attention to the offerings of the people. This passage speaks to me as the leader of my congregation. I want to serve the people who are under my care but I must never forget that I have needs of my own. If I fail to bring them to the Lord I’m bound to fail my people. In addition, this is not a one time effort. In spite of what those outside the clergy think, we pastors stand in need of God’s mercy, grace, and forgiveness on an ongoing basis. Today, as I read about these events of long ago and regardless of the huge cultural and practical differences, I find myself identifying with these priests of old as they take care of their own business before they can serve their congregation.
Take Away: If we’re to help others we need to deal with the needs of our own lives first. 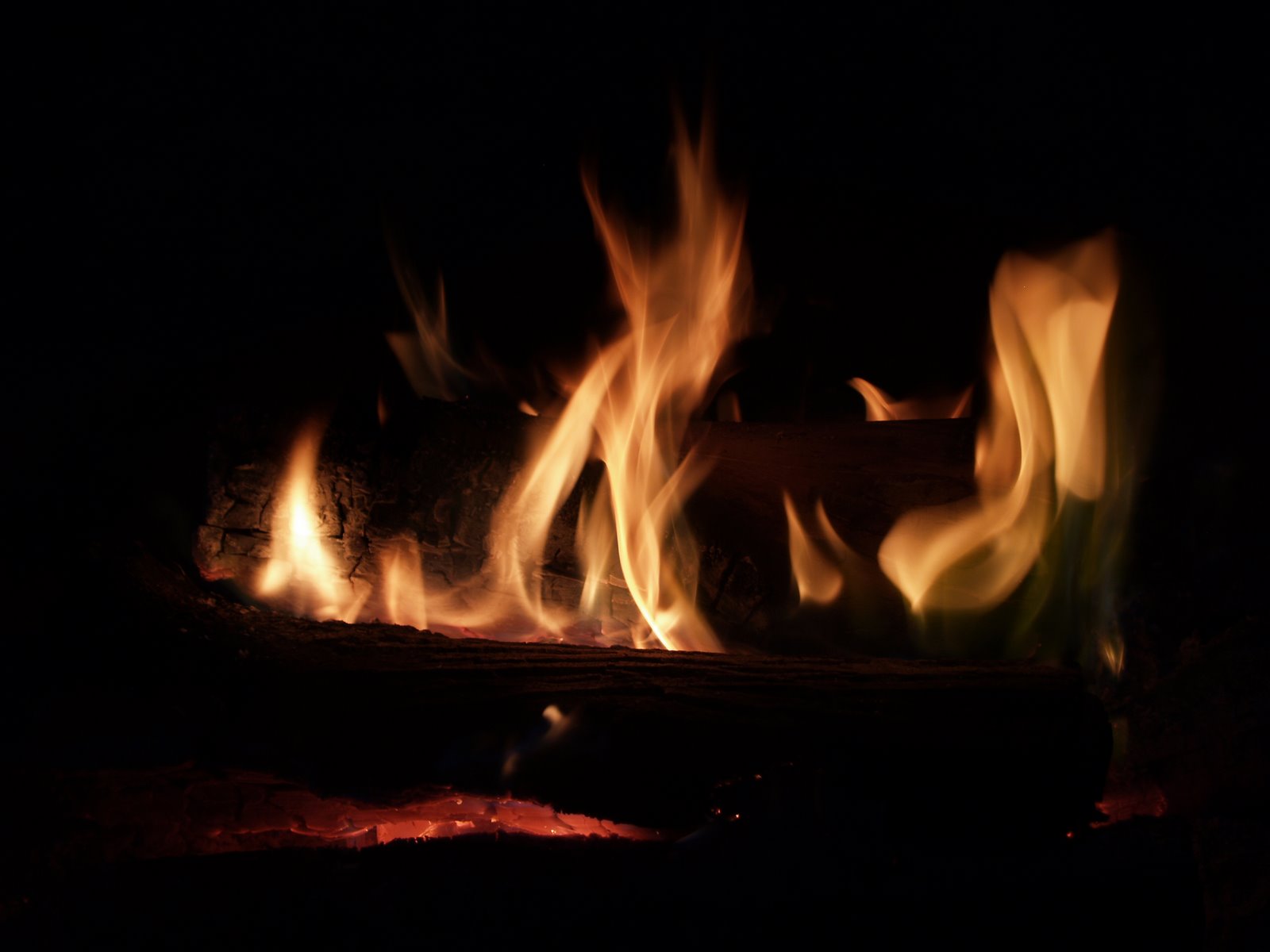 Fan the flames
Leviticus 6: Keep the fire burning on the Altar continuously. It must not go out.
Instructions for worship continue, and will throughout the book. The command to keep the Altar fire burning stands out. The fire is representative of God. It was fire that Moses encountered in the desert; it’s a pillar of fire that leads them at night. The fire of the Altar also symbolizes the presence and work of Jehovah in their midst. Because of that, the command is that it never be allowed to go out. The application is pretty easy to understand and not so easy to apply. I want the fire of God’s presence in my life to burn freely – and, like that of the burning bush: never go out. It was the work of those who tended to the Tent of Meeting to assure the perpetuity of the flame, and it’s my responsibility to keep that flame burning in my life. I pray, read the Word, and live in fellowship with God and his people. In the midst of my busyness, this is my priority. The fire of God must keep burning.
Take Away: God’s fire in my life must be tended and never taken for granted.


How God’s people live
Leviticus 5: …the moment he does realize his guilt he is held responsible.
So how do a people of God live? How do they conduct business, relate to one another, and worship? That’s the challenge that’s met in Leviticus. There’s a lot of “sin” language here. “If a man sins by…then he must….” Living justly, making things right, even being holy are the goals of Leviticus. Today I read, “If anyone sins by breaking any of the commandments of God which must not be broken, but without being aware of it at the time, the moment he does realize his guilt he is held responsible.” So much of this book of rules and regulations seems out of touch. They’re part of the Old Covenant and therefore subject to modification by the superior New Covenant. Still, there are principles that can be applied anywhere and anytime. This is one of them. Responsibility is linked to knowledge. It’s when I realize that I’ve come up short that I’m responsible for making things right. There’s grace in this – that is, God isn’t waiting for me to mess up so he can come down on me like a load of bricks (if so, I sure wouldn’t be writing these words right now). There’s also responsibility here – once I do know, I can’t retreat to, “I didn’t know.” If possible, I must make it right. I must acknowledge my failure and repent of it. To do otherwise is to presume on God’s grace and to bring condemnation upon myself.
Take Away: To know is to be responsible.

I didn’t mean to
Leviticus 4: If the whole congregation sins unintentionally…they become guilty even though no one is aware of it.
A group of children are playing in the yard when one accidentally knocks another to the ground. Soon there’s lots of crying, some because of pain and mostly because of anger. Mom comes to see what’s wrong. Billy says, “Johnny knocked me down!” Johnny responds, “I didn’t mean to.” Mom tells Johnny to apologize to his friend because, intentionally or not, he has wronged him. In this passage, as the law is given every contingency is covered, including unintentional sins. God tells them that when they fail at some point, even if they don’t know it at the time, that they’re to take action to make things right. In this instance, he isn’t talking about making restitution to a neighbor who’s been intentionally wronged. Instead, the Lord’s talking about making things right with himself. Like Johnny, we tend to stiffen and declare that we didn’t do it on purpose. Our theologians might debate about the level of guilt and work through the definition of sin but they all agree that, intentional or not, failure is an affront to God. Jesus, when he teaches his disciples to pray, instructs them to ask for forgiveness even as they forgive others. When I realize I’ve failed the Lord my response isn’t to be a declaration of innocence. Rather, it’s to be an honest confession and an effort to make things right. For these ancient Israelites that meant they needed to make an absolution-offering. For me, it may only require my sincere confession of failure and apology to the Lord. One thing that won’t work is for me to stiffen up and declare that it wasn’t on purpose.
Take Away: The proper response to a realization of failure is to confess and repent.

Rules and regs
Leviticus 1: God called Moses and spoke to him from the Tent of Meeting.
I know I’ll hear no contrary opinion when I say that the Book of Leviticus isn’t the most read book of the Bible. It’s about sacrifices and offerings and dedicating children and skin diseases. The most direct application of the rules and regulations of Leviticus pertain to the work of the Levites (those who served at the Tabernacle) and not very much to us. The instructions given touch on almost all aspects of how these Israelites of thousands of years ago were to live. In fact, it’s the “almost all” character of these regulations that opens the fuller meaning of Leviticus to us. God is coming down off the mountain to dwell among them. He’s going to inhabit the Tabernacle but that’s not all there is to it. He’s involving himself in every aspect of their lives. Of course, that includes the sacrificial system but it also includes how they’ll handle the messy part of their humanity. It includes their religious feasts and festivals but it also includes how they conduct their business affairs. I may read the prohibition against priests shaving their heads and see it as a quaint old historical fact, but when I put the whole scope of Leviticus into play I see God’s connection to every part of their lives, including how they cut their hair. I never doubt that God’s interested in how I go about worshipping him, and I’m familiar enough with the Ten Commandments to know that he insists on righteous living. However, Leviticus reminds me that the Lord’s also interested in the “non-religious” and “no-moral-aspect” parts of my life too. That doesn’t mean he intends to dictate how I handle the mundane details of my life, but it does mean he’s interested in such things and that he sees beyond the surface to the deeper meaning of things I may take for granted.
Take Away: The Lord wants to participate in all my life.