Some of our lessons learned during our 2014 Adventure are:

Now we’re ready to start thinking about 2015 which already has a couple of interesting wrinkles – I’ll post about them another time.

Columbus, TX is a lovely town with a historic downtown with several historic homes and buildings. There’s plenty of shopping and all types of eating places. The town is divided between the I10 commercial area and the old town area. We happened to visit during the Folk Fest 2014. Two of the streets by the courthouse were blocked off and there were vendors selling crafts, clothes, food and other items. The funnel cakes were, as always, a big hit with me! Our grandchildren, Sarah and Matthew, were fascinated by the glass blower at work. We could hear folk music being performed onstage as we walked and enjoyed the booths and looking inside the old Opera house. We toured the local museum which is located in the original water tower and fire house. The Vintage car show was fun. We enjoyed seeing the work that had been done to make the classic cars look new again. We especially enjoyed going to the City park where a small military camp was set. We chatted with the re-enactors there who told us about their weapons and uniforms. We then watched a re-enactment of an 1836 battle between the Texas army and the Mexican army. They shot off cannons and black powder guns giving us an idea of how the battle might have looked and sounded. I always enjoy small town events and having our grandkids along made this one especially fun for us. 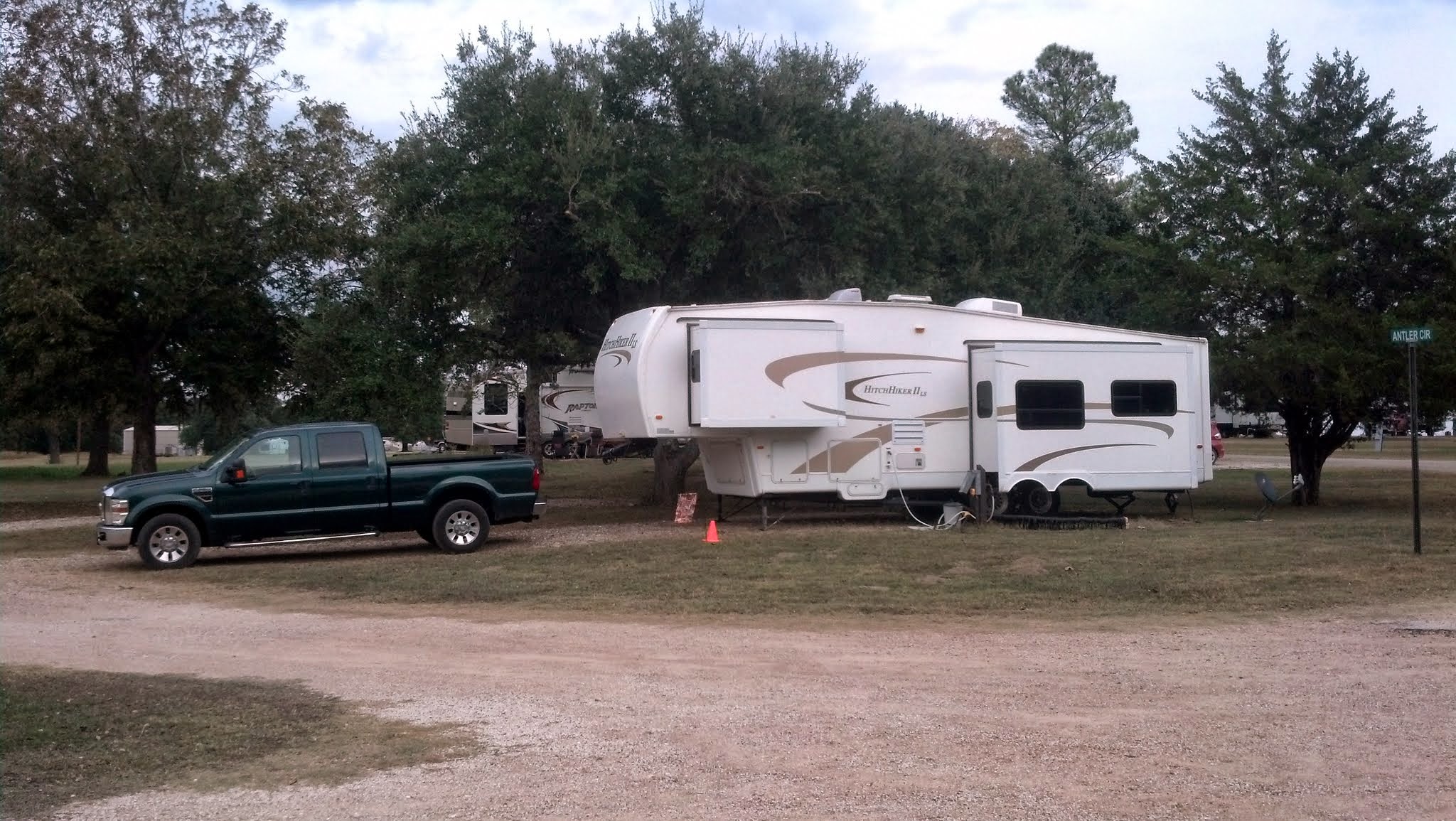 We’ve enjoyed hearing the coyotes and watching armadillos and many deer. The campground has a “no feeding” policy so while the deer aren’t especially afraid of people they do want to keep their distance. We also took advantage of the many pecan trees, picking up pecans for future use. By the way, if you are in the campground in the fall, check out the tangerine tree near the Activity Center. We picked a few of those too.

We liked it at Colorado River Thousand Trails and look forward to future visits to this easy going campground.

What the campground lacks in water it makes up for in deer. They are everywhere and rather tame – hanging out in campsites expecting the humans to feed them. Being around these graceful animals is a treat. At the same time having so many so close at hand means that their droppings give the campsites a bit of a barnyard feel – if you get my meaning! Also, one has to wonder just how healthy it is for this dense a deer population.

San Antonio with all it has to offer is around an hour away. Bandera, which is called the “Cowboy capital of Texas” is nearby. Also there are several nice Hill Country drives and destinations a reasonable distance away.

Were Medina Lake full this campground would be a real gem. As it is, I’d say it’s “okay” without being “especially special” in any way.