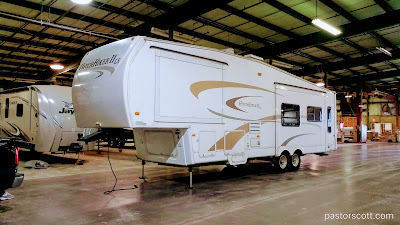 We’ve fulltimed in our 2007 Hitchhiker II for five years now and have been pleased with how well it has held up. Last year we decided to keep it for a few more years and upgraded to a Bigfoot hydraulic leveling system. We love it. This year we had a couple of bigger repairs to do so we made our way to Chanute, KS, where our NuWa Hitchhiker was built, for factory service. We dropped the camper off early on Monday morning and moved into a nearby motel for the duration. While this isn’t a review of the motel, I will mention that we were very pleased with the helpful service we received at the Chanute Knights Inn and recommend it.

The big ticket item on the 5th wheel was the big slide out that had some water damage and needed to be completely removed and basically rebuilt from the floor up. Another job was replacing the rider’s side lower-front panel that had an unfortunate run-in with a big boulder in North Dakota last summer. Also, it was time to replace all the slide seals on the camper; a bigger job than you might think. All that plus a few other minor projects were on the schedule.

On Thursday the service center, true to their word, reported repairs complete. Happily, no other big problems were found during the work. After deflating our bank account we were ready to move back in. All in all it was a positive experience and we are pleased with the service we received. When I thanked the service manager for their work I commented that I hoped not to see them again for a long time. He laughed and said he hears that a lot.