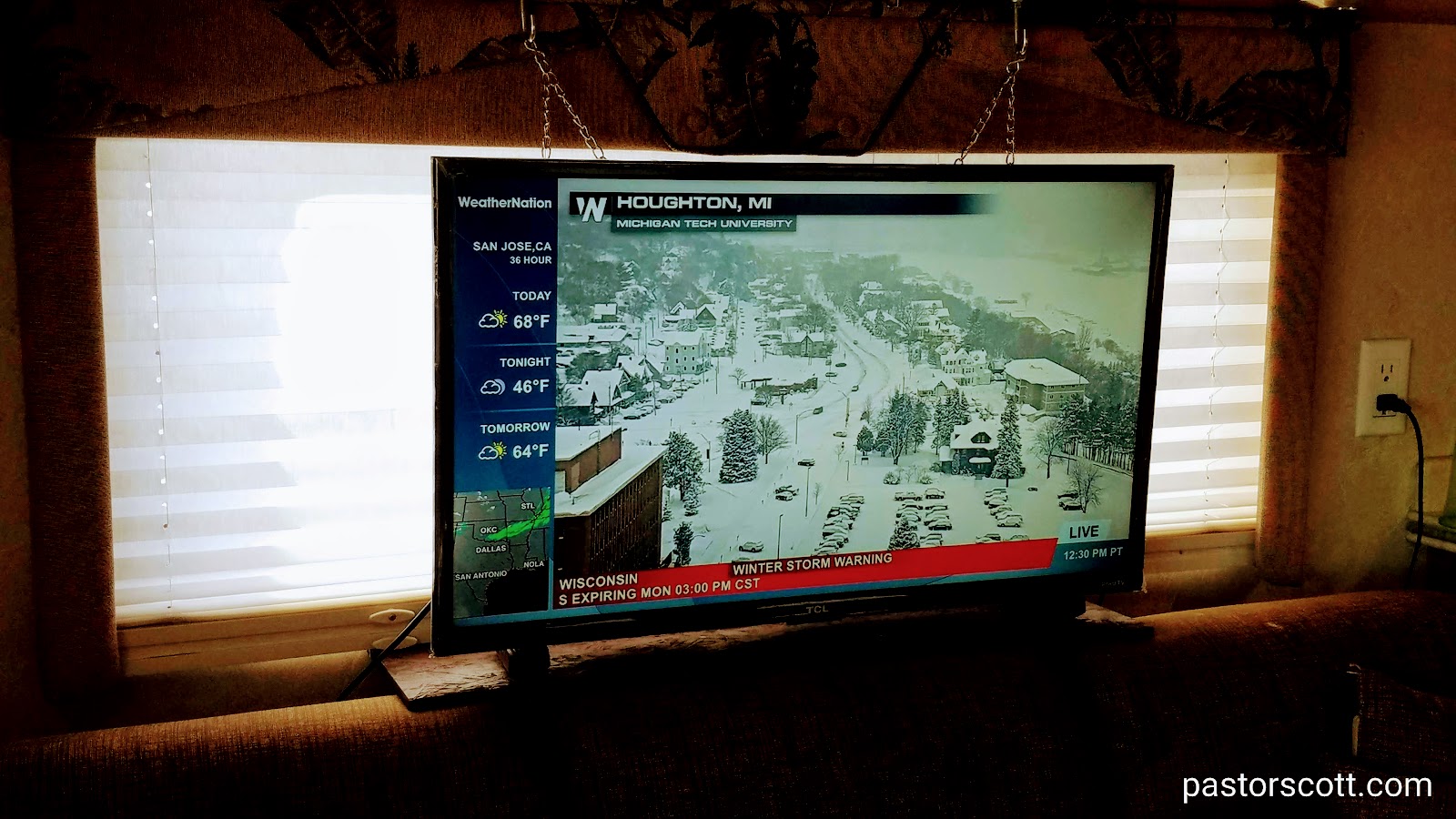 One thing I really dislike about the floorplan of many motorhomes is the placement of the TV over the driver’s seat.  I know that newer rigs are being designed differently, but motorhomes of the era of our “new” Safari Cheetah are all laid out like this.

With that in mind, one of our first projects after getting moved in was to relocate the TV.  Since there are just two of us, picking a good spot was easier than it would be for a family.  Our rig had two couches facing one another, so we got rid of one of the couches and put our recliners in place of the removed couch.

Then, I mounted the TV over the couch on the opposite side of the rig so that our recliners face it.  My approach was pretty low tech.  First, I put two hooks in the cabinet above the couch.  Then I built a shelf that sits on the back of the couch and is attached to the wall below the window.  The front of the shelf isn’t attached to the couch – it just rests on it and is kept in place by a couple of L-shaped brackets that “saddle” the couch.

The TV, then, sits on the shelf, but is also attached by chains to the hooks.  This keeps it pretty stable.  However, it will not stay there when we are moving the motorhome.  I can just unhook the chains, disconnect the HDMI cable, and lay the TV down on the couch.  This process will take less than one minute.

Meanwhile, we had a big blank space where the TV had been mounted above the driver’s area.  We recovered it will stick on cork shelf liner and attached a much-needed clock there.

Again, this is all low tech and it is also low cost.  We’re happy with this early motorhome project.

Note: happily, the scenes on the TV aren’t our local weather! After fulltiming in our beloved 2007 NuWa Hitchhiker II LS 5th wheel for nearly 6 years we have made a big change to a little driven 2005 Safari Cheetah diesel pusher coach.  The new (to us) rig has many bells and whistles.  I’ll have much more to write about this new chapter in our fulltiming adventure as time goes by.  For now we are very busy getting moved in.  Right off we have learned that a 39′ motorhome has considerably less storage than a 34′ 5th wheel!  Our family came through for us big time, helping us move out of our Hitchhiker and into the Cheetah – I don’t think we would have made it without their help.  Honestly, we aren’t nearly settled in yet.  We have time though, as we don’t intend on beginning our 2019 Adventure until mid-March.  No doubt about it, this is a big move for us that we hope gives us several more years of rv adventures.