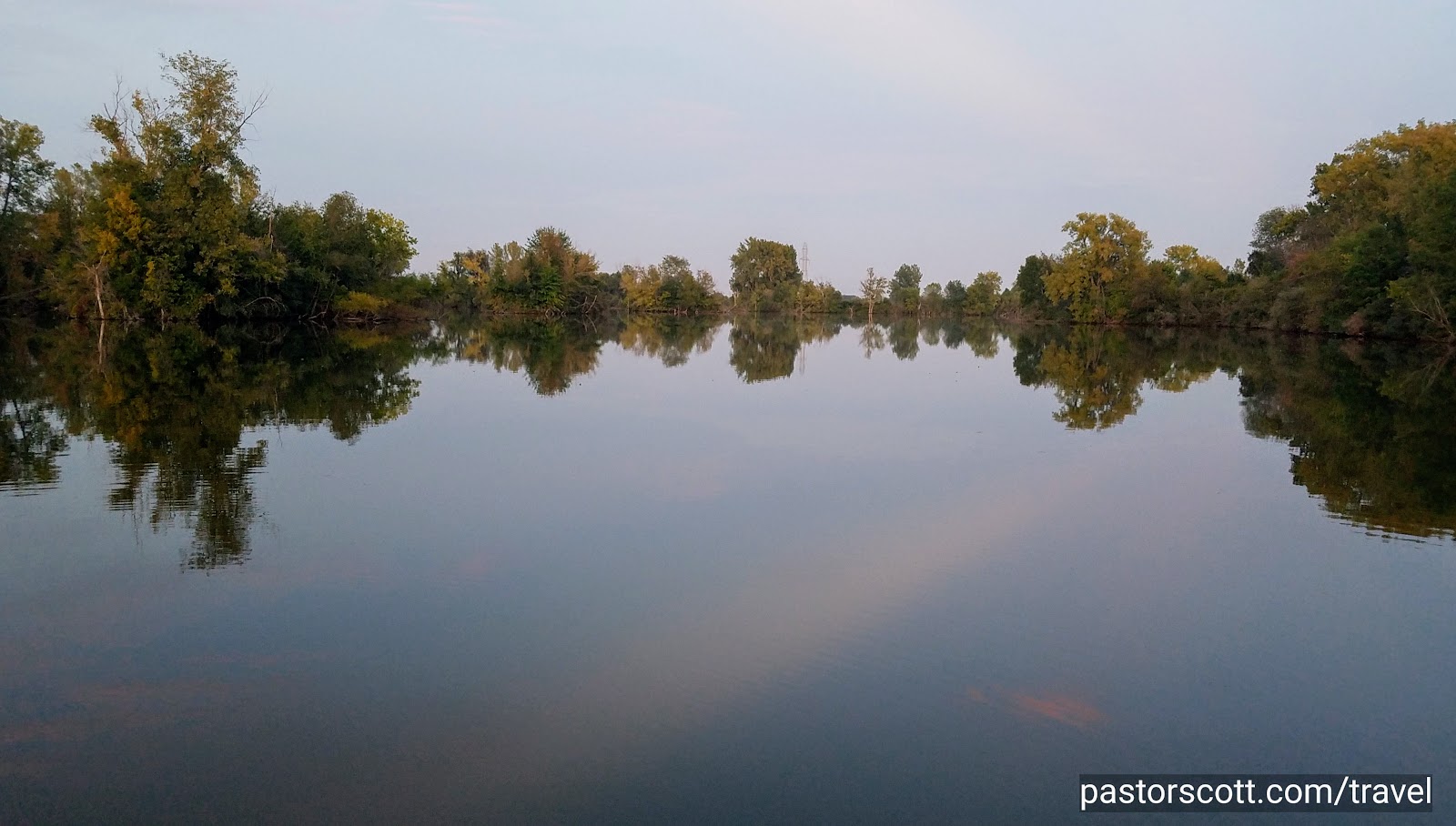 This is our third stay at Horseshoe Lakes Thousand Trails, near Clinton, Indiana. This is a good spot for a quiet stay. If you like fishing, though, it’s a destination campground with several lakes of varying sizes. We’ve seen folks out trying their luck every day that we’ve been here. One lady told me that they had enjoyed a fish dinner made up of fresh caught fish from that day. It appears that there are fish to be caught at Horseshoe Lakes!

Other reviews are here

Since I’ve reviewed this campground recently, there’s no need for me to do much of a repeat review. Here are a few new photos of this western Indiana campground. 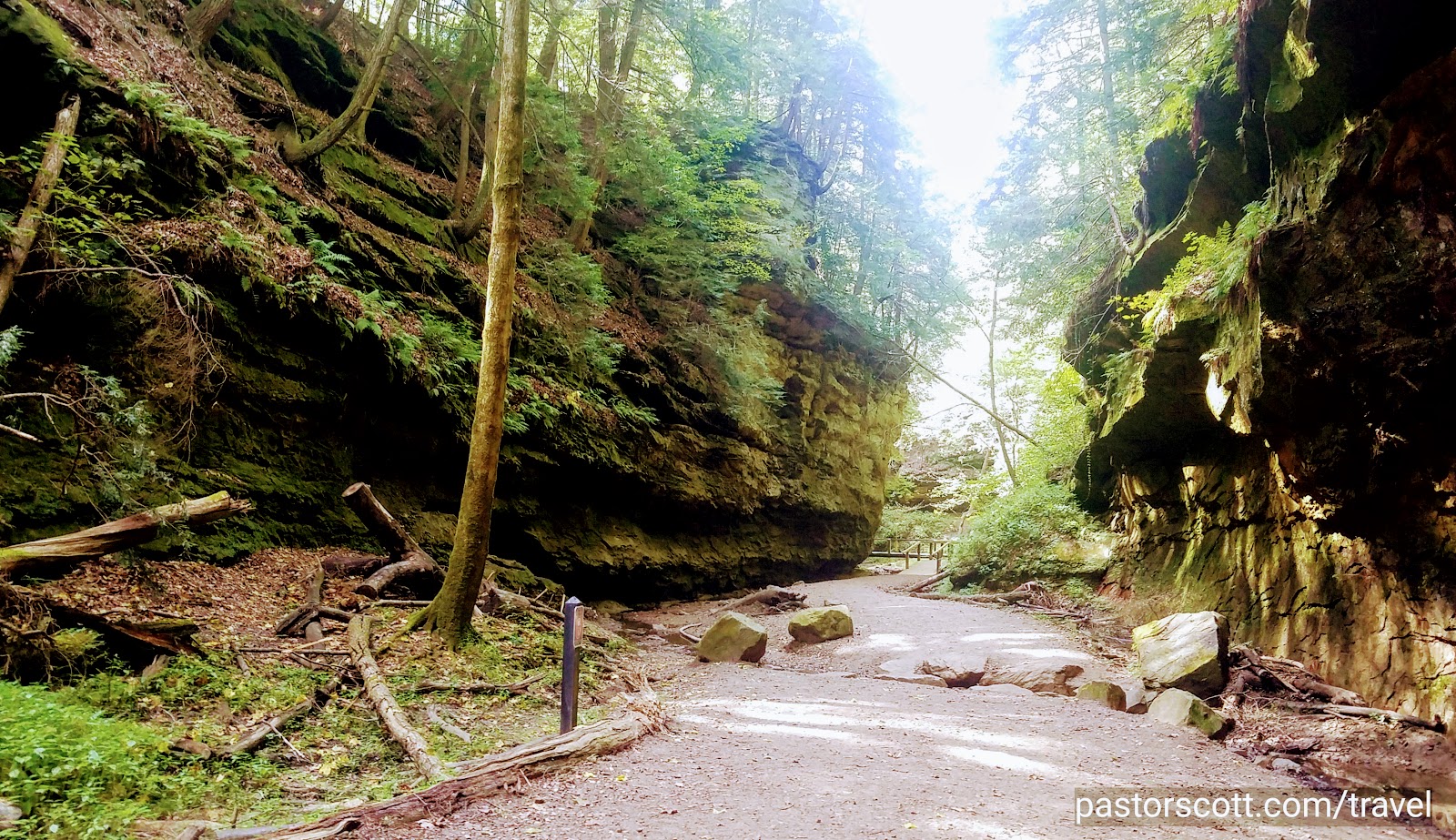 I was really looking forward to visiting with my brother Jim and sis-in-law Phyllis during our stay in western Indiana, but we also got in a couple of fun sightseeing adventures – one in Illinois and the other in Indiana.

We went the Vermilion River Fall Festival in Danville, IL. There were many fall oriented handcrafted items along with a variety of food booths. I think this is the third time this year that we stumbled on to a great car show with many nice older cars and trucks. My favorite was a 1912 Ford car that looks like one in a picture I have of my Dad as a small child in 1914.

Our most enjoyable sightseeing excursion was a visit to Turkey Run State Park near Marshall, Indiana. We have both enjoyed hiking across the years and decided to visit this popular state park. We took a short hike down steps, across a suspension bridge over Sugar Creek and down to Rocky Hollow to see a small waterfall. The water has carved the rocks and it is fun to walk along the bottom of the gorge by the stream. We took a break there in that pretty spot and had a picnic lunch. From there we turned around and came back, because I couldn’t scramble up the first set of rock “steps” without help; and that was the easy part! We walked back to the suspension bridge and followed a different trail that took us through the woods on what I expected to be an easier trail to a covered bridge built in the early 1900’s and across the creek heading back to the nature center. We encountered many steps and scrambles going up hill and down. Some were man made and had rails but several were natural and more difficult for me. However we made it and I am glad we took day to enjoy the beauty of nature.

Our stay here this year has been the longest stop of our 2019 Adventure. We were ready to slow down, do a few small projects, and get ready for our slow move back to Texas. The very fact that we planned on a longer stay at Kenisee is a clue as to how much we like this campground.

This is our third stay at Kenisee Lake Thousand Trails in Jefferson, OH. Since I reviewed the campground after both previous stays so I’ll just post some new photos and pretty much let that be my review.

This stay, we have been in one of the big pull-throughs in the rear of the campground. These sites are long enough for the biggest of rigs and easy to get and and out of. We like the size of the sites, and at times we like being a bit isolated from the activity in the rest of the campground. We think it is both good and bad that these sites are quite a ways from the Activity Center, pool, and bath houses.

The last time we were at Kenisee we had lots of rain and our site sometimes felt a bit like an island surrounded by water. This stay we have had good weather most of the time. When it did rain, we noticed that the same sites we were in last time got muddy but work that has been done cleaning out drainage ditches behind them has made a difference. Overall, we have enjoyed the cool temps and sunny days. 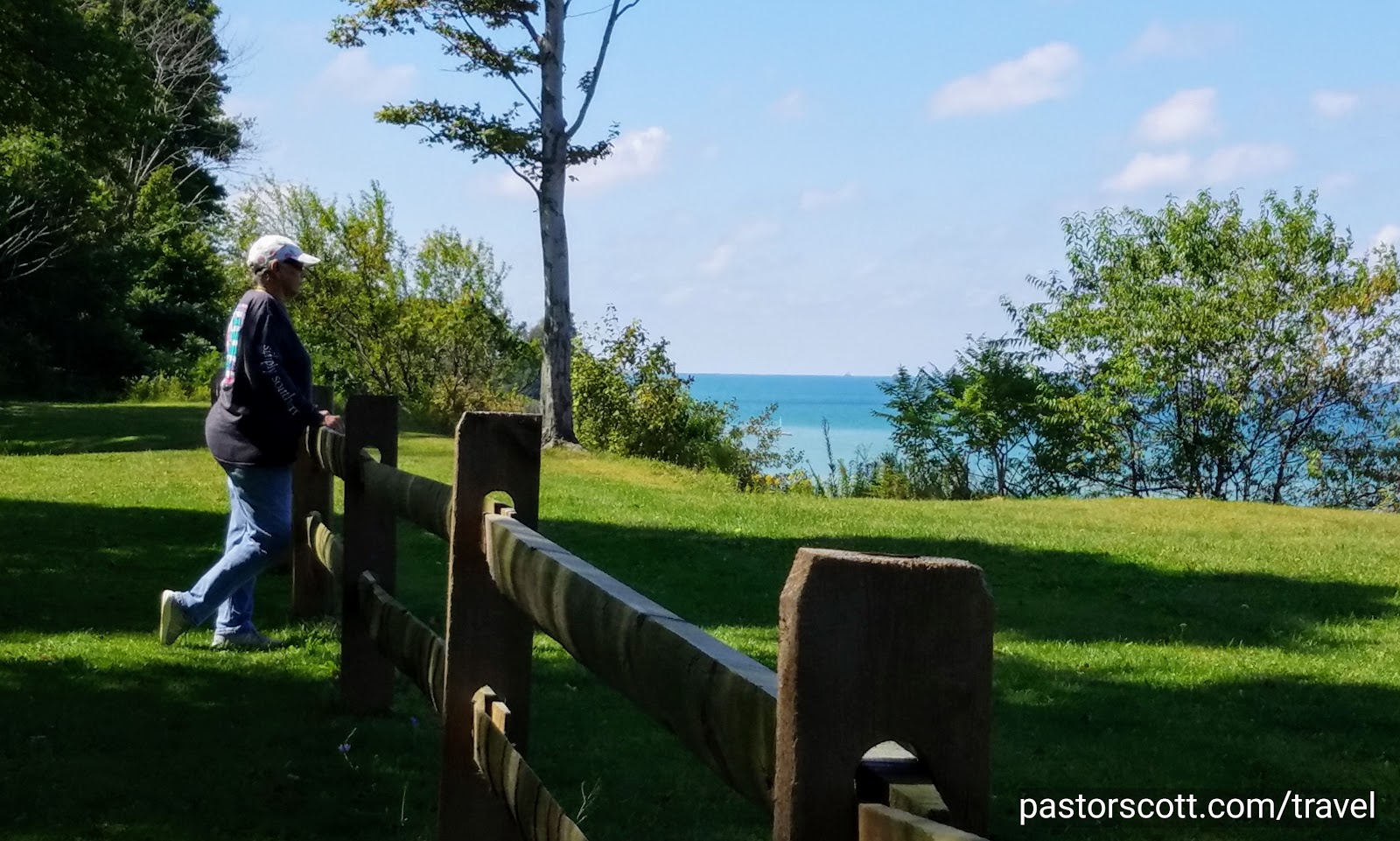 Our stay in northeastern Ohio was a longer stay for us and that gave us plenty of time to explore the area.

We never get our fill of waterfalls so even though we hiked Watkins Glen and then visited Niagara Falls over the past few weeks, we took a day trip and visited a couple more waterfalls near Cleveland OH. Chagrin Falls, just south of Cleveland is located in the town of Chagrin. There are cute shops and restaurants around it. It is obviously a destination for people wanting to get out of the big city and although not overwhelming the falls are pretty and a nice place to eat lunch or just hang out. From there we drove through the country and arrived at the Brandywine Falls in beautiful Cayahoga Valley National Park. The falls have hiking and biking trails. We walked down a boardwalk for a great view of the falls. It is beautiful and well worth the effort to get down there and back. There is also an overlook for people who cannot or choose to not take the stairs.

On the Saturday before Labor Day We drove to Geneva-On-The-Lake and found it very busy due to a variety of events happening that day. We especially enjoyed a big Volkswagen car show in the city park which was filled with VWs and camper vans from across the years. Afterward, we enjoyed sitting on a bench and listening to the waves of Lake Erie for a while.

We went to Cleveland to visit the Historic William G. Matthew steam ship but found that it was only open on weekends after Labor Day. The ship is adjacent to the Rock N Roll Hall of Fame and since we were already there so we thought we would check it out. Honestly, since we aren’t fans of current popular music our expectations weren’t very high but there was more of interest to us than we expected. We spent most of our time in the sections of the museum that focus on the early days of rock and roll music. We heard lots of music and watched clips of singers from the 40’s, 50’s and 60’s. We saw photos, costumes and other memorabilia from many singers and groups. It was interesting seeing displays of groups like The Beach Boys, the Beatles, and the Temptations. Other singers included Elvis Presley, Roy Orbison, Aretha Franklin, Johnny Cash and many more. We were able to walk through the tour bus that was built for Johnny and June Cash and their son. Interesting and sobering to us was the way the music changed to darker, angry, themes as time passed.

There is a historically unique restaurant near our campground: Covered Bridge Pizza in North Kingsville. The dining area is inside a covered bridge. The bridge was originally the Foreman Road Bridge built in 1862. In 1972 the county decided to replace it and the old bridge was sold for five dollars! It was carefully dismantled and placed in storage. In 1975 half of the old bridge was used to open the restaurant we visited and in 1977 a second location was opened using the other half of the bridge. There are a variety of items on the menu but we were there for pizza. The crust is made fresh daily and the spicy sauce along with the meat and cheese made an excellent lunch.

On a clear sunny day we took a picnic and visited a few of the many parks along Lake Erie. It was fun seeing the various parks. One was small with few picnic tables and small playground. Another had a large covered area with tables and a concession with boardwalks down to the beach. Yet another had a covered area with tables and several porch type swings with the beach area adjacent to it. We had a pleasant lunch by carrying our lunch and chairs down close to the water. A nice quiet way to spend a few hours.

When we saw advertising about a balloon glow not far from our campground we decided to go. There were eight of the giant hot air balloons that were beautiful when lit up. There were a lot of people there enjoying the display. The business, Debonné, hosts a full scale hot air balloon festival in the spring, it must be amazing to see.