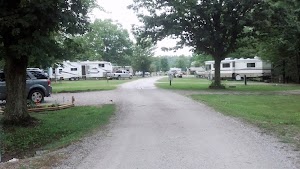 For this move we drove from the southwestern corner of Ohio to the northeastern corner, a distance of around 260 miles, to Kenisee Lake Thousand Trails near Jefferson, Ohio.  We arrived just ahead of a big thunderstorm which was followed a couple of days later by an even bigger storm that prompted us to leave the camper and hang out in the Activity Center for a while.  The second storm, though, had a welcome benefit as it ushered in a cold front and a few days of beautiful clear skies and highs in the 70’s.  As I write this, the glorious cool days are past and we’re back into humid highs of near 90.  It was nice while it lasted. 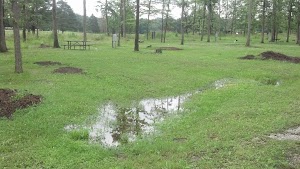 There are four camping loops here at Kenisee.  “A Loop” is, I think, the best.  It has more shade trees with nice roomy sites.   “B” and “C” are okay, but without as much shade.  “D Loop” isn’t a good place to be in wet conditions.  There was a lot of standing water there over the first several days of our stay and I don’t think anyone would have even thought of putting a RV there.  With dryer conditions it might be okay, but the sites really aren’t that great under any condition.  One very nice thing about this campground is that all sites are full hook-up, thus there’s no scramble to grab the sewer sites and not as much resentment concerning the seasonals taking all the sewer sites as we’ve seen elsewhere. 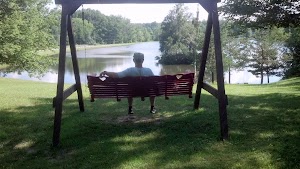 Kenisee Lake, itself is a beautiful lake.  There are a couple of other ponds on the property.  Just about all the Thousand Trails campgrounds have miniature golf, but the course here is better than any we have seen.  I think it’s nice enough to be a commercial course.  There’s also a heated pool and other amenities.  The WiFi here isn’t worth much.  You have to be right in the Activity Center to use it, and then it’s fair at best.  I had somewhat better luck with my 4G.  It wasn’t the best cellular connect I’ve had but it did the job.

There were some nice activities over the weekend: ice cream, a chocolate fountain (along with the showing of “Willie Wonka”), and a few other children’s activities.  One afternoon we enjoyed listening to a rehearsal session of a family bluegrass group that just happens to be staying here.  They are “Amber Waves Band” and we hope to hear them in concert somewhere down the line.

The area has some interesting attractions.  There are covered bridges, some nice beach and waterfront parks at Lake Erie, and other historical sites and events.  Nearby Jefferson has a scenic railroad but it doesn’t start operations till late in the summer and into the fall.

We like Kenisee Lake Thousand Trails and will likely return here as part of a future swing through the Great Lakes states.