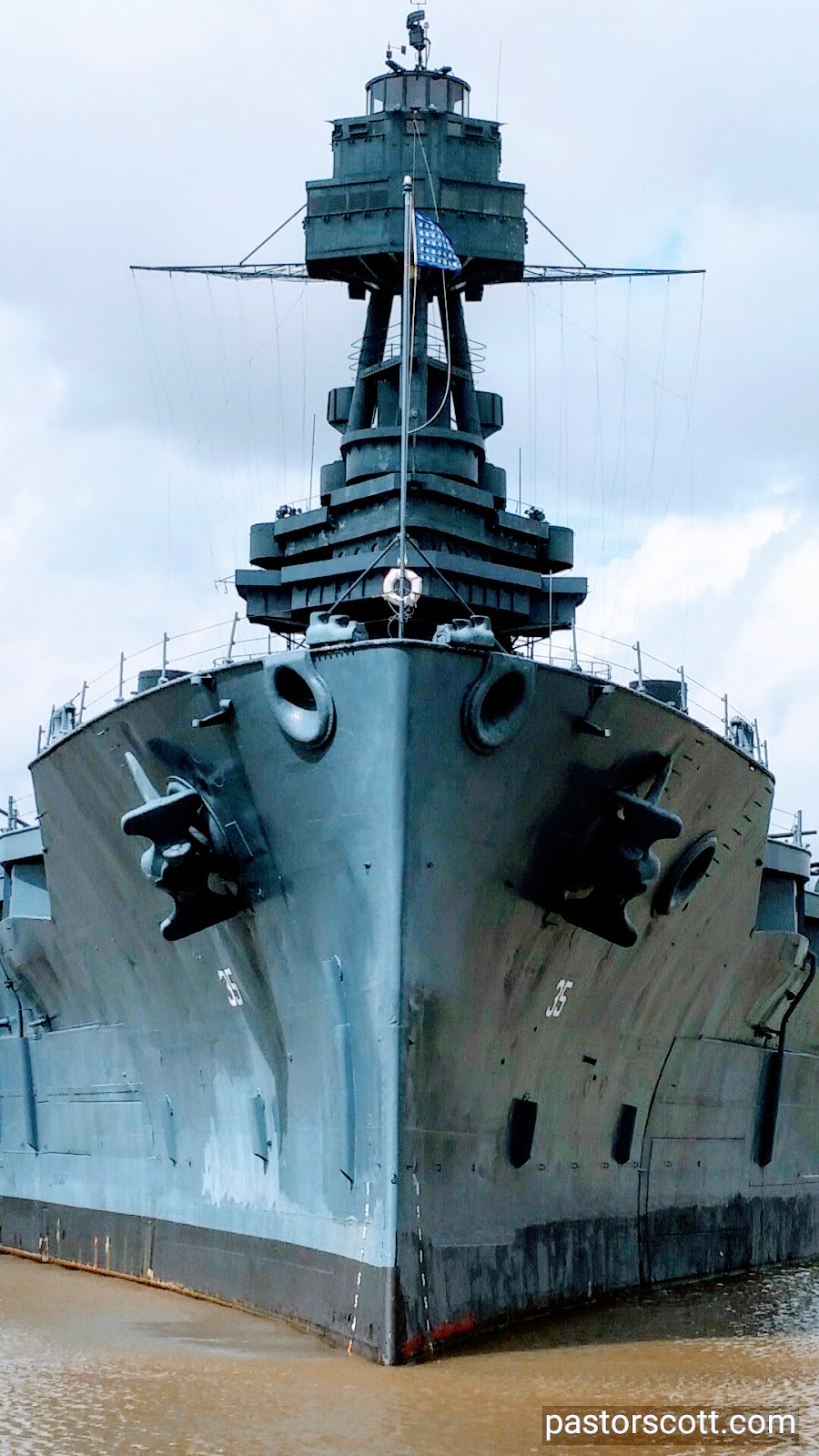 Our 4 1/2 month stay at San Jacinto Battleground where we have been volunteering on Battleship Texas is drawing to an end.  This has been our 4th season here.  It is nice feeling we are helping out and the staff always makes us feel appreciated.  We also like being close to family and friends during these winter stays.  We had more winter this year than we wanted with several cold, icy days.  All in all though, we have few complaints; enjoying meeting people and getting to know our fellow camp hosts.

This year, in addition to our hours volunteering, we have filled in as interim pastor at Baytown Nazarene.  The church isn’t far from us and we’ve helped out there the entire time we’ve been at our “winter quarters.”  The church family has treated us very well and it has been good getting to know them better.  If you add our time filling in at Denison prior to arriving at San Jacinto, I’ve ministered nearly every Sunday over the past 5-6 months.  No complaints, but it hasn’t felt very much like retirement to me!  Lord willing, I’ll enjoy some down time now that we’re beginning our 2018 Adventure.

The closer we get to D-Day the more time I spend looking at potential travel routes and campgrounds.  Several reservations have already been made; especially at popular campgrounds during the busiest times of the year.   Our ultimate destination this year is the coast of Maine, but we won’t make it that far till mid- to late summer.  As a planner, I enjoy putting the trip together and then refining it. That process will continue all through the Adventure.

So, it won’t be long before we blast off.  We’ll keep posting sightseeing and campground reviews here to the blog.  Stay tuned!

We’re just concluding our third winter of volunteering at San Jacinto Battlefield and Battleship Texas.  Honestly, my previous reviews pretty much say it all.  Once again we’ve enjoyed spending most of our volunteer time talking to people about the Texas – the only remaining battleship that served in both WWI and WWII.  We’ve also enjoyed working with other volunteers who, like us, fulltime in RVs.  Some are have come here year after year, so when we return it is a bit of a homecoming.  Others are new friends and it has been fun getting to know them.  The park staff are a pleasure to work with too.  If you haven’t gotten the message: we like doing this and plan on returning next fall for another winter of volunteering.

As has already been described, 2016 was a non-traveling year for us.  Because of that, we’re looking forward to a return to our touring fulltime RV life.  Our stationary circumstances left me with even more time to plan our 2017 Adventure than I would have had otherwise.  We have a potential route planned and several reservations have already been made.  No doubt, we will end up making adjustments, but if you don’t have a plan it’s impossible to change your plans!  Also, we’re headed for some popular areas in the coming months and without reservations we’d end up struggling to find a suitable spot or end up paying premium prices somewhere.

One change we’re making this year is adding a couple of extended, one month stays.  The idea is to spend extra time in interesting areas, save a bit of money by paying monthly rather than weekly or daily rates, and stay in southern states till warmer temperatures arrive in northern states later in the spring.  Time will tell if we like this strategy and will include it in future planning.

We’ve had a good stay at our winter quarters of San Jacinto Battleground and Battleship Texas and we’re looking forward to great days on our 2017 Adventure.

We were watching the weather on TV yesterday evening and suddenly, without warning, we found ourselves on the screen!  Well, almost, anyway.  Come to find out, there’s an EarthCam on top of San Jacinto Monument pointed our way.  The weather channel was using EarthCam to show what a pretty day it was here.  The camera looks out over the reflecting pool, to Battleship Texas, and to the Houston Ship Channel.  Our RV is parked to the left of all that, nearly lost in the trees, not far from the big electrical transmission tower.   Even though we are pretty much lost in the low resolution and the trees, it feels kind of funny knowing that while we are volunteering at Battleship Texas and San Jacinto Battlefield that we are on camera for the world to see!

Check it out at here.

I haven’t done any new posts in a while because we are pretty much doing a repeat of last year’s winter volunteering stint at San Jacinto Monument-Battleship Texas State Historical Park in La Porte, Texas. Most everything I’ve written before still applies. The ship looks the same (as should a museum ship!), the staff is pretty much the same, and the other volunteers are the same good people (with the exception of one fine couple who have had to leave the RVing lifestyle). This is a great place to volunteer, at least during the mild Houston winters, and people renew their commitment to return year after year.

While we much prefer the traveling lifestyle, I have to admit that there’s something comforting about returning to the same campsite with all the same neighbors after being strangers pretty much everywhere we’ve been through the majority of the year. Also, we enjoy our two-day-a-week volunteering as we talk to people about Battleship Texas and it’s 102 year history, serving in both World Wars I and II.

We also enjoy being close to family and friends. Sundays are especially a joy as we attend church with my sister and our son and his family. What a blessing it was to see our grandson called up to the front to help the pastor light an Advent candle and to see our granddaughter singing on the church Praise Team!

Meanwhile, these months are our medical months. There have been several doctor’s visits with more yet to come. Jackie and I have both had to change our primary physicians this year. Her change worked out better than mine and I’ll be doing some more doctor shopping in the near future.

While it’s beyond the scope of this blog, I’ll mention that this volunteering time has included my having a major round with my lower back. Frankly, it’s just as well that we aren’t traveling because for a while I couldn’t even bear to ride in a car much less tow the 5th wheel. Apparently, a lower back tweak manifested itself in such a way that I couldn’t bear to sit down. I spent my days either standing up and laying down. The funny thing was that I could spend my workdays on the battleship standing up, doing tours, etc. without a lot of pain. Then, to my dismay I couldn’t sit down without whimpering in pain!

After seeing a couple of doctors who did x-rays, etc. to rule out any fractures or the like I decided to switch over to a highly recommended chiropractor who assured me that the problem wasn’t in my hip where the pain was the worst, but was in my lower back which was manifesting itself in my hip and down my leg. I’m still visiting him three times a week and progress is being made. At least I can drive again and sit down for awhile before the pain reappears.

Also, I’ll mention that we returned to the Battleship to finish the year and into 2017.  Most of the photos below were taken in the first part of the year, but a few of them were taken in November and December.

Now, if you are ready to sign up, I have both good news and bad news for you. Here’s the bad news, there are a limited number of positions at this facility and people tend to return year after year. They generally have first choice of dates and they come for the winters. Here’s the good news: if you are willing to come in the late spring through early fall, there are generally volunteer opportunities. The weather will be hot and humid, but if you love history and have a reason to want to be in the Houston area, you might want to look into this. It starts with your signing up on this Texas Parks and Wildlife site.  Volunteers park their RV’s in full hookup, 50 amp sites located either on a parking lot by the maintenance building or nearby.

In spite of the negatives, we’ve enjoyed our time at San Jacinto Monument and the Battleship Texas and, yes, we’ve already signed up for next winter.

For now, though, the road is calling and we’re about to begin our 2015 Adventure!

We’re about half way through our three month stay at the San Jacinto Monument and Battleship Texas. This is our first “workamping” experience and we are enjoying our time here. I’ll write more about our experience when we do a wrap up of our stay at the end of April.

As we did last winter, we’re doing camper projects. The biggest two were putting laminate flooring down in place of carpet and re-caulking the exterior of the 5th wheel. We’ve also purchased new fulltime level water hoses to replace the less robust ones we’ve been using and splurged on a name sign for the campsite.

We’re starting to nail down our itinerary for our 2015 Adventure. We’re heading for the upper Midwest — Iowa, Minnesota, Wisconsin, and the UP of Michigan. We’re hoping to enjoy exploring those areas and maybe even having opportunity to meet up with old friends while making new ones.

The Marines came to the Battleship Texas to commemorate the 70th anniversary of the battle at Iwo Jima – yes, the Texas was there.  After the ceremony a fireboat from the Houston Ship Channel put on quite a show.

We’ve been at San Jacinto Battleground State Historic Site where we are volunteering for nearly three weeks now. This is an interesting place and we like what we are doing. We’re dividing our time between working on the Battleship Texas in the archives doing filing and data entry and at the San Jacinto monument where we are helping at a touch table displaying items related to 1836 when Texas won its independence. The people here are friendly and easy to work with. We’ll do a longer review later on. Here are a few photos – you’ll note the photo of the Battleship Texas all dressed out in it’s signal flags. This is in preparation for a special Iwo Jima ceremony this weekend.

We’re now settled in at San Jacinto Monument, La Porte, TX – This is where Texas was born – it is also where the Battleship Texas is located. We are here as volunteers, our first “workcamping” experience. There are no public campsites, but a few for volunteers. We’re looking forward to this two month adventure!