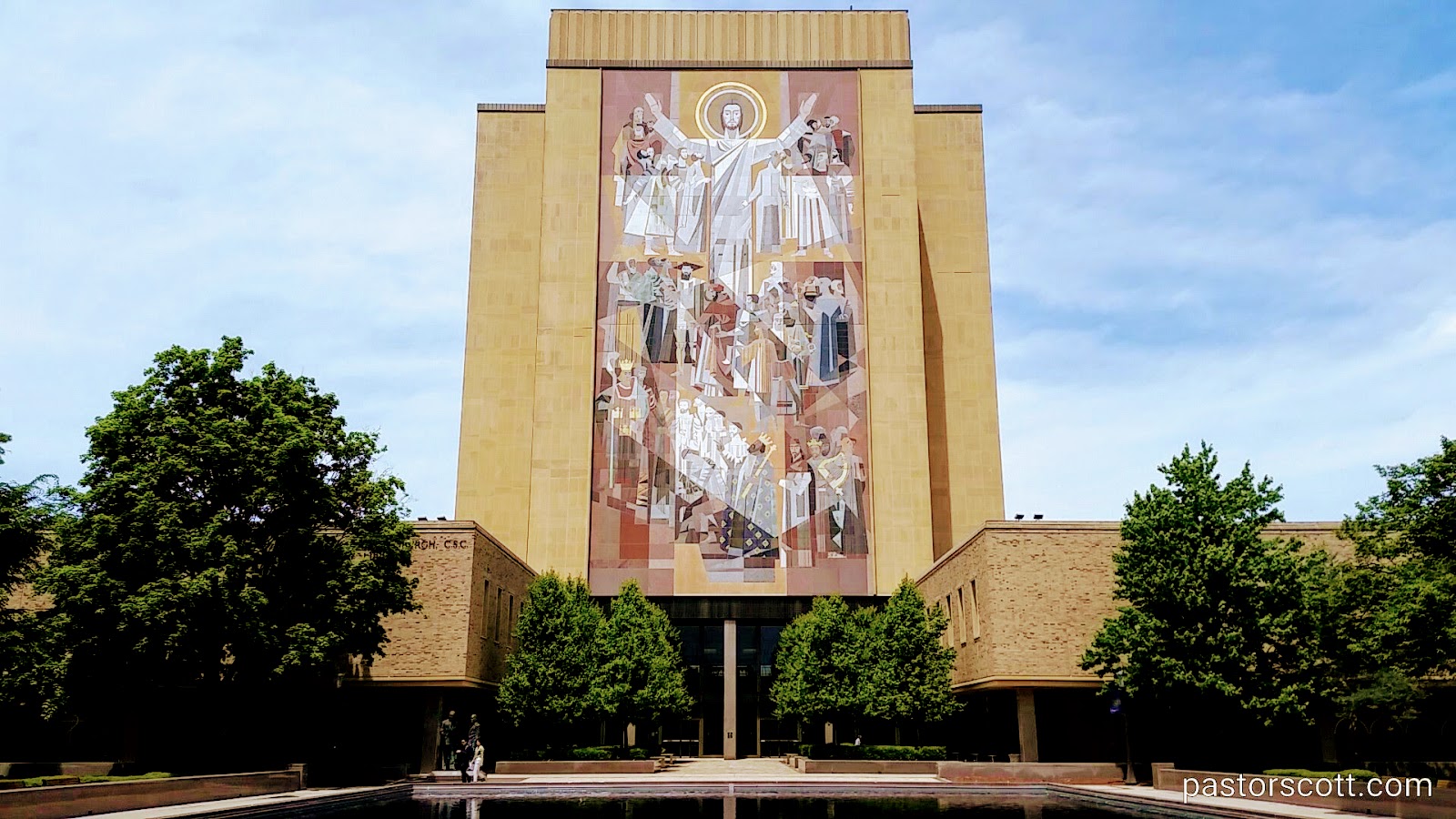 Being close to South Bend, Indiana and having heard of Notre Dame University all my life we decided to drive down and tour of the campus. I was impressed with beautiful well kept grounds. The famous Gold Dome and statue Of The Virgin Mary on top is a well known landmark. We toured the bookstore and saw the many items ranging from text books to Fighting Irish themed clothings. We took a walking tour with a friendly young lady who is a sophomore at the University. She said they have about 16 female dorms and 17 male dorms. The Basilica of the Sacred Heart is a beautiful ornate place of worship with the stained glass windows first installed In 1893. Our final stop was The Hesburgh Library featuring Jesus depicted in a famous mural as the “Word of Life” facing Notre Dame Stadium. This giant mural is better known as “Touchdown Jesus”. There is much more to see on campus should you decide to visit.

We also enjoyed our day in St. Joseph, Michigan. This city is at the mouth the St. Joseph River on Lake Michigan. Many people were enjoying the Silver Beach County Park. This park offers wide beaches with playgrounds for kids of all ages. There were several volleyball nets. We saw lots of children playing in the water at the Whirlpool Compass Fountain. They were having a blast being sprayed with with water shooting up from the floor for them to run through and stand under and huge water cannons shooting across the park on timers. There is also a paved trail above the shoreline with benches to sit on and enjoy lake view.

From the river walkway we could see the two lighthouses called Range lights at the mouth of the St.Joseph River. They were built in 1907 when the pier was lengthened.

A major attraction of the Park is the Silver Beach Carousel open year around and along with unique handmade horses. It features a rocking peacock and sea serpent benches that are wheelchair accessible.

This is a great area to visit and I know there is much more to see. In fact, I’ll have another review of the area as we continue our visit in the vicinity at a different campground next week. 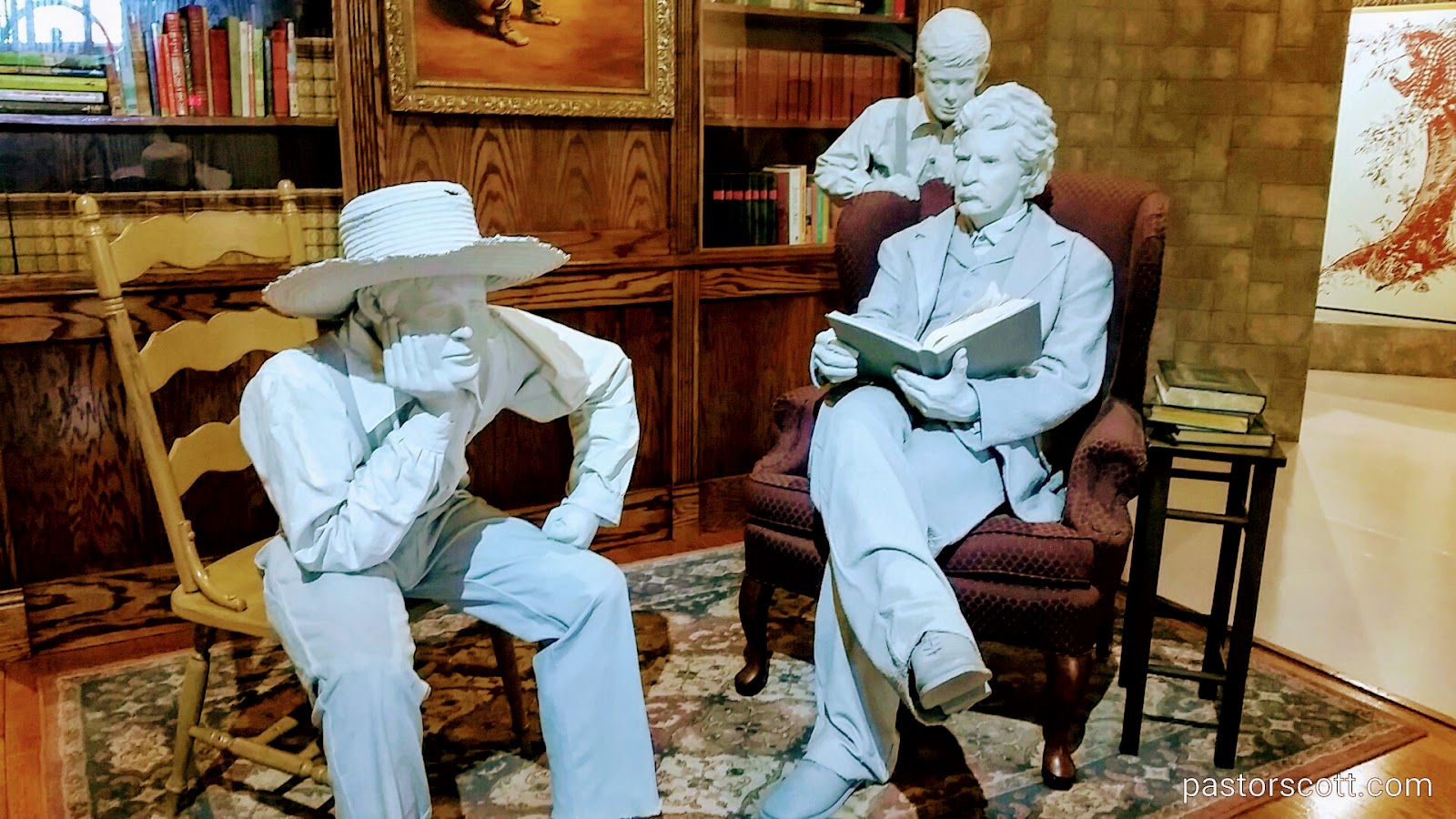 We had a fun afternoon at the Mark Twain Boyhood Home and Museum in Hannibal, Missouri. Our visit began at the museum where we enjoyed going through the interactive dioramas with monitors playing clips of movies based on various books written by Samuel Clemens. The ones I enjoyed most were the cave where Tom and Becky were lost and Tom’s raft where he and runaway Jim had their adventures. Many of his other popular books are represented by film clips and dioramas. We saw a mockup of a pilot’s wheelhouse with a whistle and other items from the Mississippi Steamboat era that inspired Samuel Clemens to write his books. The museum also has first editions of all his books, original Norman Rockwell illustrations from them, and personal memorabilia from his life. From the Museum we walked a few blocks to Clemens boyhood home and the Becky Thatcher house which was actually the home of Laura Hawkins who was the inspiration for Becky. We also saw the Huckleberry Finn House which was home to Tom Blankenship who was the inspiration for Huck. Finally, we toured the John M. Clemens Justice of the Peace office. From there we returned to the museum for the highlight of our time in Hannibal. A very talented actor entertained us for around 30 minutes as Samuel Clemens. We thoroughly enjoyed his presentation and highly recommend it to all, young and old alike. 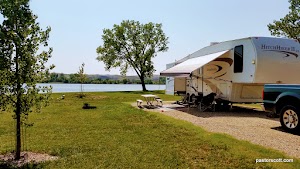 After driving nearly 200 miles across the corn and hay fields of the South Dakota Prairie we dropped into the Missouri River Valley and arrived at a beautiful lakeside campground on the outskirts of Pierre, SD. Farm Island Recreation Area is a pretty spot with large, level sites and 50 amp electrical hookups. There is a convenient water and dump station near the entrance. We arrived, happily with reservations, on an August Friday afternoon and the campground was nearly full. There were many families and the kids had a blast swimming in the lake. The lake is fed by the Missouri River. It has a sandy bottom and is pretty shallow for a good distance out – making it perfect for children. Because of the layout of the campground only a fourth of the sites are by the water. Because of that, people pretty much walk through those sites to get to the lake. I know some people get bent out of shape when that happens, but at this campground it’s just the way it is. We smiled and said “hello” and they smiled in return. By Sunday evening, though, that was all over. The place was nearly empty and we pretty much had the campground to ourselves the rest of our stay. 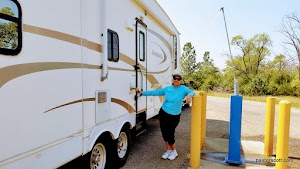 Here are a few things you might want to know if you plan on visiting Farm Island. In addition to the camping fee there is a South Dakota State Parks vehicle entry fee of $6 a day. Since we were intending to stay four days and then visit Custer State Park later on we got a $30 annual pass instead. There is also a $7.50 out of state booking fee. I had no problem getting satellite TV which is a good thing because I don’t think there was any over the air TV. My Verizon signal was solid. When I tested the water with our TDS meter it reported numbers as high as 1000. That’s really high and at the limit of what is considered fit for human consumption. I suggest you bring drinking water. Finally, the flies are real pests throughout this area. Be prepared to defend yourself unless the wind is blowing. 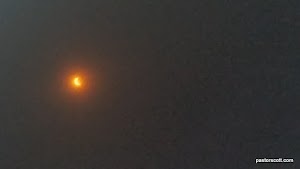 Our final day at Farm Island was “eclipse day.” We woke to a severe thunderstorm that was pretty scary – wind, hail, and a downpour. Really, we should have bugged out to one of the shower houses. However, the storm was on us before we knew it. After 10 or 15 minutes of (thankfully) small hail, things let up. We feared the heavy clouds would block our view of the eclipse which was at nearly 90% for the area. However, at just the right time the skies cleared and we had a good view of the impressive display of God’s handiwork.

This library combines books and modern day technology with a beautiful historic building. There are current titles readily available, a children’s section and reading areas tucked into corners surrounded by memorabilia and personal items from the area. I enjoyed the atmosphere and friendly staff.

This lovely welcoming library is part of the Tillamook County Library System. The free wifi 24 hours a day is a great asset to this community with all the tourism that comes to the beach. There is also a variety of materials for all ages and a comfortable area where parents can interact with their children. Around the Library are comfortable chairs for reading  and tables to spread out if needed.  One sculpture in the Children’s area that caught my eye is “Philbert” the Oregon Beaver. It was handcrafted by Jim Stober in 1988. Beside the library is a community garden with all produce going to local food banks.  This is  a welcoming place for a get away from the crowds on the beach.

This lovely library in Coupeville has several displays set up to encourage reading by all ages. The building is inviting with places to set and read, public access to the internet and many windows giving it an open feeling. What caught my eye was the beautiful arch over the entrance to the children’s department and the Large Print collection near the reading area. The Friends of the Library have a book sale area near the entrance. 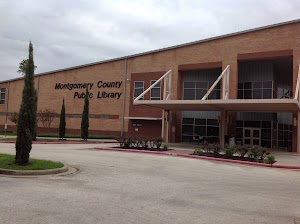 Central Branch  is located in a business like building with open space and a place for everyone inside.  On the first floor is the circulation area and the Children’s Department, which is warm with a fall bulletin board, wall art and a child sized school bus. There are tables available for children and the adults who bring them.

The second floor has adult materials to check out or use in house, a computer room, a reading area with newspapers and magazines, a large genealogy room, and an area set aside for teens.

The  library and staff are warm and welcoming making this a place for everyone.

Located on a major thoroughfare Murphy Memorial Library  is serving it’s community offering  free internet access  along with books and materials for all ages.  They have ongoing story times for children,  a genealogy section, a reading area and a large section of paperback books.  Free one on one help with research and computer needs is available by appointment.  When the renovation is completed at the new location the library will have more to offer with meeting rooms, and a separate computer area; a place where the community can gather. 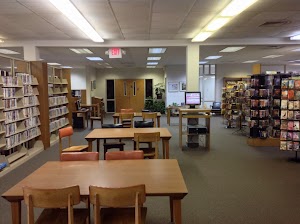 This warm, friendly library is part of the Lawrence County Public Library System. They offer traditional library services with their well laid out collection, free internet access on the pubilc PCs and wireless for those with their own electronic devices. There are also free computer classes available. There is a comfortable area to read a current magazine or newspaper and tables available for those who are looking for a place to spread out and work. 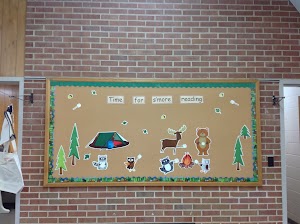 the large bulletin board stating “Time for S’more Reading” with a fall camping scene encourages people to read.  A quilt in the Children’s Department tells the story of the Little Engine That Could while the Story Time Poster is eye catching with its puzzle piece boarder sitting on a shelf with a giraffe as an end piece.

The Lawrence County room is set aside for  Historians and Genealogists looking for a place to do research and work on their projects. On the main floor there is one display case with World War II era memorabilia and another with antique cameras and various figurines about photography.

This library is a place where anyone can use a computer, go online, read or do research with staff nearby to help if needed. 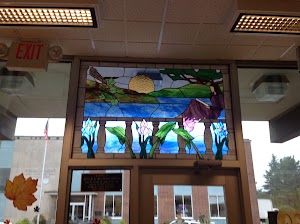 This lovely  library with it’s warm and friendly staff  reaches out to the community offering a variety of materials and programs. To learn about upcoming programs check the website to see what is available for you. The book collection is augmented by a book lease program that allows the library to receive bestsellers throughout the year keeping the collection current. There are also CDs, audio books, videos, and DVDs for all ages. For those with electronic devices wireless internet is available and there are downloadable books available through the library website. 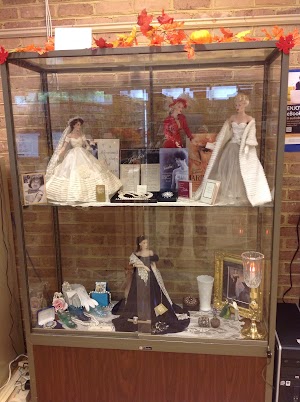 The support of the community for the library is shown in  many ways including the the beautiful stained glass windows donated by local families. Area artists have donated their creations and the Children’s area has been brightened by posters and wall art created by local artists. A volunteer oversees the glass display case. I was lucky enough to see this month’s privately owned display. It includes a Jackie Kennedy Onassis Doll and replica jewelry, Marilyn Monroe Dolls, and a Vivian Leigh Doll dressed as Scarlett O’Hara along with jewelry, glassware, and figurines.

There is Genealogical Room with information on local families and material about the area. A local historian volunteers his time helping people with genealogical questions. The staff and volunteers are doing a great job of encouraging literacy in their community.