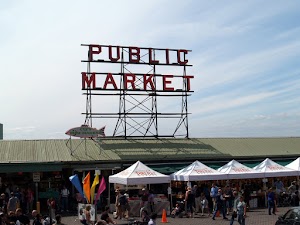 We spent our last vacation day exploring downtown Seattle.  Jackie especially wanted to visit the Seattle Central Library which is famous for its design and unique architecture.  We arrived just in time to join an architect led tour of the library. It was quite interesting and I recommend the tour to anyone.

We, and about every person in the Seattle metro area headed for Pike Place.  It was packed.  Still, we enjoyed checking out all the flower and fish and vegetable venders.  We also had lunch at a crowded and busy little fish and chips place.  After an hour or so at Pike Place we headed up the hill a ways, bought some coffee and sat down for a nice break.

All the downtown area is a free ride zone on the city bus system, so we hopped on and off at several places before boarding the monorail to City Center where we watched a street performer doing some nifty juggling.

We finished off the evening at the Cheesecake Factory.  Neither of us could eat all the food that we ordered.  From there it was back to the hotel for final packing in preparation for an early flight home. 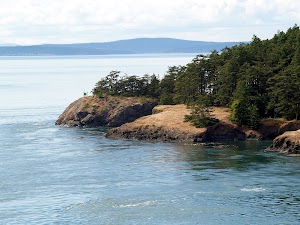 When we awoke on Friday morning the ship was docked in Seattle.  We had a leisurely breakfast because our time to disembark was 8:50.  As we ate, we could see people leaving the ship and heading for customs.  There was a quick, last visit to our room, a word of thanks to our stateroom attendant (we had prepaid our tips before departure), and a last visit to a couple of our favorite places on Rhapsody.  Our departure group was called a few minutes early and our walk through customs was mere formality in which we never even stopped walking.  Our luggage was waiting for us and we were soon at the Budget car rental desk.  I’d rented from a different office than the one that usually services pier 91, but the fellow at the desk called for me and within 20 minutes we were picked up and taken to the agency to pick up our car.
The rest of Friday was spent exploring north of Seattle, specifically Whidbey Island.  We took the ferry across to Clinton and then took our time driving and looking.  Highlights were lunch at Greenbank Farm, Fort Casey State Park with its lighthouse, and Deception Pass State Park.  Once we were off the island, we continued north a ways on Highway 11 and enjoyed the dramatic views along the way.

I had bid for and gotten a room at the downtown Sheridan for our final nights of vacation.  We arrived back in Seattle, found our hotel, and enjoyed a very good night’s sleep.

Luggage and cruise documents in hand we arrived at Seattle’s Pier 91.  Friends from the Seattle area hosted us for a few days and then were kind enough to drop us off at the pier.  As soon as the vehicle stopped a porter asked us if we were on Rhapsody of the Seas.  When we said we were he said he’d be glad to take care of our baggage for us.  Since our booking was all electronic, we didn’t have official luggage tags that some people have.  The porter led us to a counter where a man asked our names and then handed our porter tags.  We stood there while he put them on and then he told us that was it.  The bags would be delivered to our room.  I handed him a tip and we went inside where a smiling lady looked at our documentation and pointed us to security.

Passing through security was a lot like going through security at an airport.  However, unlike it is at the airport, the people handing security were smiling and welcoming us.  From there we stood in a long, but fast moving line for cruise check in.  Within 10 minutes we were at a window where we showed our passports, cruise documents, and the credit card which was linked to our sail account.  Then, with our sail passes in hand (these serve as our identification, room key, and on board credit card) we walked up several flights to board the ship on level five.  Around 20 minutes from arriving at the pier we walked onto the ship.

The rooms were already open so we found our way to our tiny room.  Since we’d asked for a “queen size” bed the room had been set up that way.  The room was so small that you couldn’t walk around the bed, but had to climb on and off the end.  Closet space was adequate in spite of the fact that our two big suitcases took up most of one side.  The bathroom was tiny and the shower had only a curtain rather than a door.  It is likely that the biggest advantage to having a higher class cabin isn’t the outside view so much as it is the amount of space.  Still, there was plenty of drawer space.  We unloaded our luggage and found spots for everything.

We had eaten while waiting for the luggage to be delivered.  The buffet restaurant is called the Windjammer and is located in the front of the ship on deck nine.  Our first meal there wasn’t especially impressive; however, subsequent meals were just fine. 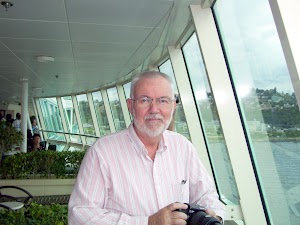 With mild temperatures on deck we spent the departure time outside, enjoying beautiful views of downtown Seattle as it receded to the distance.   Puget Sound is filled with interesting shipping.  As we watched the world go by we realized that one of the boats we were seeing was a submarine being escorted by two coast guard boats.

Rhapsody isn’t the biggest Royal Caribbean ship but it’s large enough to need some exploration of the eleven decks that include everything from two pools to a small shopping center to several places to enjoy music.  One of the most impressive was a violin-piano duo situated right at the center of the ship in the Centrum that is open up through the ship from deck four to deck nine.  The music was wonderful and could be heard in the seating areas on each deck.   Meanwhile, out by one of the pools a group was singing contemporary oldies.

Our dining choice was “My time” so we weren’t tied to a specific eating time.  The first night, we ate the evening meal in the main dining room.  Everything thing was done formal style and our waiter, Emal was very good, instantly learning the names of all seven people at the table.  Although we ate in different area each night, Emal never failed to call us by name when he saw us walking through his area to be seated elsewhere.

The motion of the ship was more than I expected, but still relatively minor.  It felt a little like driving over a road that is mildly rutted.  In a few places there’s quite a bit of vibration but most everywhere there’s just a gentle reminder that one is on a ship that is actually moving.